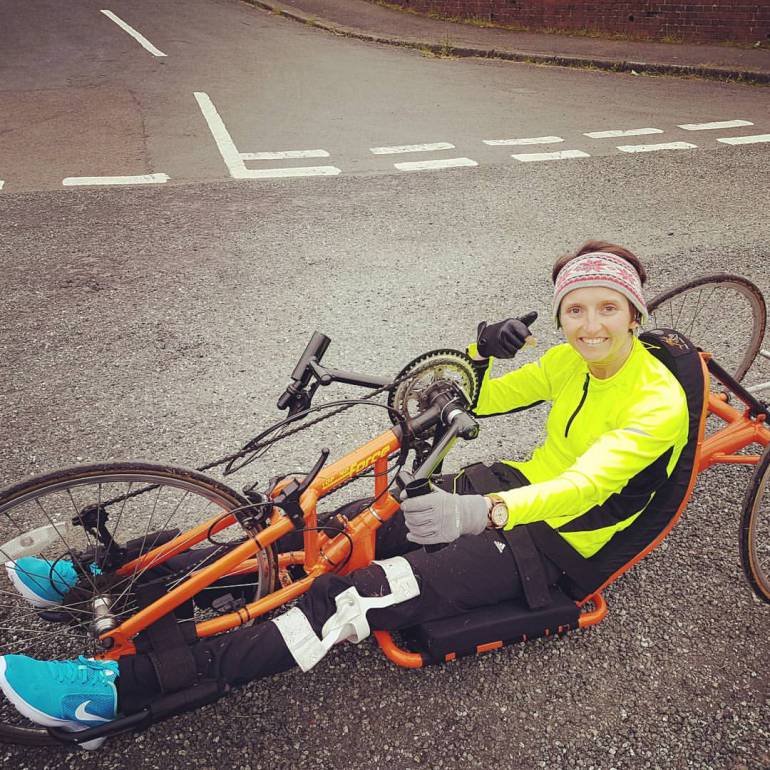 I want to run the half marathon. But I can’t run. I’m disabled.

The next option is to wheel it, in my wheelchair. But wait, that’s not an option, I struggle to wheel down the corridor.

Around three years ago, as cycling increased in popularity after the 2012 Olympics, I decided that I wanted a piece of this, what seemed to be, addictive activity.  I turned to Facebook… where else do people turn to for anything these days.

I found a page Handcycling in the UK and posted a few words asking if anyone knew of any handcycles going for a reasonable price.  Within minutes my phone started pinging, keen handcyclists who were experts in the field private messaged me with some great advice and recommendations.  As people commented on my post, trying to sell their bikes, these gentlemen would coach me on how to haggle and get the best price for the bike, and making sure I didn’t pay more than its worth.

My belief in humanity was restored,  this was a great example of the good and kindness which is in this World, but gets buried by all the sorrow and hatred the media prefer to highlight (don’t get me started, that’s for another blog)

A lovely guy from Liverpool was my seller, so off my friend and I went one Saturday on a road trip (8 hours) to collect the bike.

My personal trainer at the time, Richard Wilder (awesome PT in Cardiff) told me to make sure I actually used it, not let it collect dust in the garage.  He even went a step further and signed me up for the Swansea 10k in 2015 (guess this is partly the job of a PT, having the ability to help push you out of your comfort zone.) Well, it certainly worked and as I crossed the finish line I felt a great sense of achievement.

I wanted another challenge. Yes, lets step it up, Swansea half marathon.

So one thing you should know about me, I always leave everything to the last minute, I even strive on the adrenaline of working towards a deadline.  On this occasion it would’ve helped if I didn’t work this way, because a single month of training wouldn’t be advisable. But this is what I left myself with and I had to get on with it.  I worked out if I trained three times a week, I had twelve bike sessions before the race.  Panic mode was not setting in yet.  I can get so laid back, that at times, I want to give myself a shake ?

The first session was four miles, man it was tough.  So, I decided to stick with four miles for about 5 sessions, which turned out to be a good idea as I could see an improvement in my technique, and I started to feel comfortable on the bike.  Week before the event I got up to eight miles.  I decided not to go further in training, I was happy with the eight that I could do comfortably, and believed that on the day I would have enough fuel and determination for the extra five miles

My mind had been so focused on the training, that I hadn’t even thought about the route itself.  When I saw that the race would take me around some corners and over a tight bridge the doubt kicked in, as others advise against it.  The bike I ride is very long, making turns is not easy when you have clear space, let alone with a crowd of runners.

After some debating between my negative and positive sides, I came to the conclusion that the race itself wouldn’t be accessible for the bike.  It is designed for runners after all.

But then I asked myself, why do I want to do the race that’s designed for runners?  Why do I want to fit in, follow the crowd?  I have always believed in daring to be different, to be my own person, and be OK with that. What it came down to,  it wasn’t the medal or crowd watching that I needed, completing the distance is what would give me the sense of achievement, and that would be enough.

25th June 2017, Swansea half marathon took place in the morning.  In the afternoon Tina and Mia (awesome supportive friend who ran with me) alternative half marathon happened.  13.1 miles later, I got that amazing feeling and sense of achievement, exactly what I wanted when I signed up for the original race.

Human On Wheels is all about Tina Marie Evans and her unique brand of positivity in life.